At Fenix Group, we believe you can turn back the time, and all that has been forgotten can regain its former splendour.

The house is located near Targowa street and Solidarności avenue, therefore offering easy access to public transport. There are several tramway and bus lines nearby, as well as the second metro line.

The elegant corner building at 25 Okrzei street, also known as the"House of the Owls", was built around 1906 for duke Bronisław Massalski. The author of the design is unknown. Literature on the subject usually attributes its authorship to Henryk Stiffelman and Stanisław Weiss because of the elevation decorations that combine elements of Art Nouveau and eclecticism.
The top angle of the building is adorned with a protrusion topped with a dome. On the elevations, which are meticulously being brought back to their former glory, we can see bas-reliefs depicting bats and dragons. The magnificent sculptures of owls with spread wings, which give the building its name, will return to the façade.

We combine the old with the new in such a way that the structures continue to delight us with their historic details, yet are simultaneously full of modern technical solutions.

The listed building at 26 Okrzei street which remembers the times of the horse-drawn trams is situated on the eastern side of the Vistula river, in the fast developing area. The house is located near Targowa street and Solidarności avenue, therefore offering easy access to public transport. There are several tramway and bus lines nearby, as well as the second metro line.

Plenty of shops, popular cafes and restaurants can be found in this neighbourhood, as well as schools and offices. There is a state-of-the-art cinema across the street, and a park close by. You can reach a railway station and a shopping centre on foot. The Warsaw Zoo, the National Stadium and the Old Town are just a stone’s throw away. All that makes 26 Okrzei street an excellent address to live at, as well as run a business.

The floors have been designed with utmost care. When renovating interiors, we source our products from small, artisanal tile manufacturers in France, Germany and Poland. 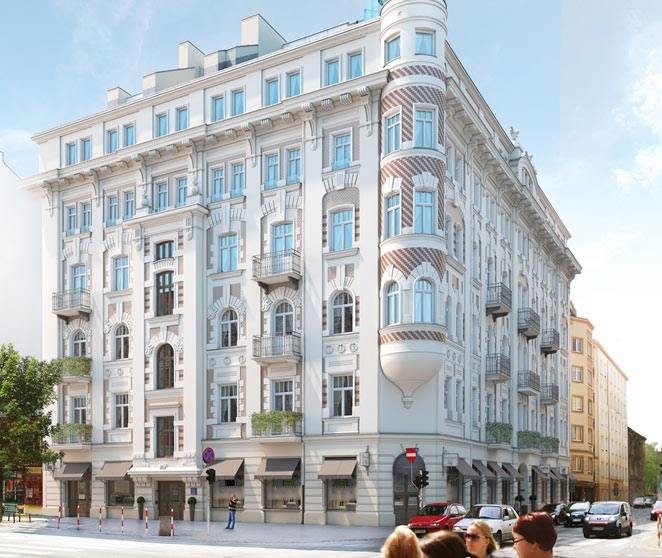 No apartments at this floor, please choose another one.

Paying attention to every detail, we give back forgotten places their former identity. Our passion and knowledge allow us to reawaken the very souls of buildings after a long and deep slumber.